A Deeper Look at Centaurus A

The strange galaxy Centaurus A is pictured in a new image from the European Southern Observatory. With a total exposure time of more than 50 hours this is probably the deepest view of this peculiar and spectacular object ever created. The image was produced by the Wide Field Imager of the MPG/ESO 2.2-metre telescope at ESO’s La Silla Observatory in Chile.

Centaurus A, also known as NGC 5128 [1], is a peculiar massive elliptical galaxy with a supermassive black hole at its heart. It lies about 12 million light-years away in the southern constellation of Centaurus (The Centaur) and has the distinction of being the most prominent radio galaxy in the sky. Astronomers think that the bright nucleus, strong radio emission and jet features of Centaurus A are produced by a central black hole with a mass of about 100 million times that of the Sun. Matter from the dense central parts of the galaxy releases vast amounts of energy as it falls towards the black hole.

This Wide Field Imager (WFI) picture allows us to appreciate the galaxy’s elliptical nature, which shows up as the elongated shape of the fainter outer parts. The glow that fills much of the picture comes from hundreds of billions of cooler and older stars. Unlike most elliptical galaxies, however, Centaurus A’s smooth shape is disturbed by a broad and patchy band of dark material that obscures the galaxy’s centre.

The dark band harbours large amounts of gas, dust and young stars. Bright young star clusters appear at the upper-right and lower-left edges of the band along with the red glow of star-forming clouds of hydrogen, whilst some isolated dust clouds are silhouetted against the stellar background. These features, and the prominent radio emission, are strong evidence that Centaurus A is the result of a merger between two galaxies. The dusty band is probably the mangled remains of a spiral galaxy in the process of being ripped apart by the gravitational pull of the giant elliptical galaxy.

The new set of images from WFI include long exposures through red, green and blue filters as well as filters specially designed to isolate the light from glowing hydrogen and oxygen. The latter help us to spot the known optical jet features around Centaurus A, which were barely visible in a previous image from the Wide Field Imager (eso0315a).

Extending from the galaxy to the upper left corner of the image are two groups of reddish filaments, which are roughly lined up with the huge jets that are prominent in radio images. Both sets of filaments are stellar nurseries, containing hot young stars [2]. Above the left side of the dusty band, we find the inner filaments, lying about 30 000 light-years away of the nucleus. Further out, around 65 000 light-years away from the galaxy’s nucleus and close to the upper left corner of the image, the outer filaments are visible. There is also possibly a very much fainter trace of a counter jet extending to the lower right.

Centaurus A has been extensively studied at wavelengths ranging from radio all the way to gamma-rays. In particular, radio and X-ray observations have been crucial for studying the interaction between the energetic output of the central supermassive black hole and its surroundings, see eso0903. Studies of Centaurus A with ALMA are just beginning.

[1] The galaxy was first documented by British astronomer James Dunlop at the Parramatta observatory in Australia on August 4, 1826. This galaxy is often called Centaurus A because was the first major source of radio waves discovered in the constellation of Centaurus back in the 1950s.

[2] The origin of both filaments is not clear and astronomers still debate whether they are the result of the ionisation produced by radiation from the nucleus or the result of shocks within the gas clumps. 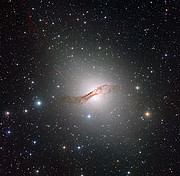 PR video eso1221a
Zooming in on the strange galaxy Centaurus A

PR video eso1221b
Panning over a deep view at the strange galaxy Centaurus A
Pošaljite nam svoje komentare!
Subscribe to receive news from ESO in your language
Accelerated by CDN77
Uslovi & odredbe