Astronomers using ESO’s world-leading exoplanet hunter HARPS have today announced a rich haul of more than 50 new exoplanets, including 16 super-Earths, one of which orbits at the edge of the habitable zone of its star. By studying the properties of all the HARPS planets found so far, the team has found that about 40% of stars similar to the Sun have at least one planet lighter than Saturn.

The HARPS spectrograph on the 3.6-metre telescope at ESO’s La Silla Observatory in Chile is the world’s most successful planet finder [1]. The HARPS team, led by Michel Mayor (University of Geneva, Switzerland), today announced the discovery of more than 50 new exoplanets orbiting nearby stars, including sixteen super-Earths [2]. This is the largest number of such planets ever announced at one time [3]. The new findings are being presented at a conference on Extreme Solar Systems where 350 exoplanet experts are meeting in Wyoming, USA.

“The harvest of discoveries from HARPS has exceeded all expectations and includes an exceptionally rich population of super-Earths and Neptune-type planets hosted by stars very similar to our Sun. And even better — the new results show that the pace of discovery is accelerating,” says Mayor.

In the eight years since it started surveying stars like the Sun using the radial velocity technique HARPS has been used to discover more than 150 new planets. About two thirds of all the known exoplanets with masses less than that of Neptune [4] were discovered by HARPS. These exceptional results are the fruit of several hundred nights of HARPS observations [5].

Working with HARPS observations of 376 Sun-like stars, astronomers have now also much improved the estimate of how likely it is that a star like the Sun is host to low-mass planets (as opposed to gaseous giants). They find that about 40% of such stars have at least one planet less massive than Saturn. The majority of exoplanets of Neptune mass or less appear to be in systems with multiple planets.

With upgrades to both hardware and software systems in progress, HARPS is being pushed to the next level of stability and sensitivity to search for rocky planets that could support life. Ten nearby stars similar to the Sun were selected for a new survey. These stars had already been observed by HARPS and are known to be suitable for extremely precise radial velocity measurements. After two years of work, the team of astronomers has discovered five new planets with masses less than five times that of Earth.

“These planets will be among the best targets for future space telescopes to look for signs of life in the planet’s atmosphere by looking for chemical signatures such as evidence of oxygen,” explains Francesco Pepe (Geneva Observatory, Switzerland), the lead author of one of the recent papers.

One of the recently announced newly discovered planets, HD 85512 b, is estimated to be only 3.6 times the mass of the Earth [6] and is located at the edge of the habitable zone — a narrow zone around a star in which water may be present in liquid form if conditions are right [7].

The increasing precision of the new HARPS survey now allows the detection of planets under two Earth masses. HARPS is now so sensitive that it can detect radial velocity amplitudes of significantly less than 4 km/hour [8] — less than walking speed.

"The detection of HD 85512 b is far from the limit of HARPS and demonstrates the possibility of discovering other super-Earths in the habitable zones around stars similar to the Sun," adds Mayor.

These results make astronomers confident that they are close to discovering other small rocky habitable planets around stars similar to our Sun. New instruments are planned to further this search. These include a copy of HARPS to be installed on the Telescopio Nazionale Galileo in the Canary Islands, to survey stars in the northern sky, as well as a new and more powerful planet-finder, called ESPRESSO, to be installed on ESO’s Very Large Telescope in 2016 [9]. Looking further into the future also the CODEX instrument on the European Extremely Large Telescope (E-ELT) will push this technique to a higher level.

"In the coming ten to twenty years we should have the first list of potentially habitable planets in the Sun's neighbourhood. Making such a list is essential before future experiments can search for possible spectroscopic signatures of life in the exoplanet atmospheres," concludes Michel Mayor, who discovered the first-ever exoplanet around a normal star in 1995.

[1] HARPS measures the radial velocity of a star with extraordinary precision. A planet in orbit around a star causes the star to regularly move towards and away from a distant observer on Earth. Due to the Doppler effect, this radial velocity change induces a shift of the star’s spectrum towards longer wavelengths as it moves away (called a redshift) and a blueshift (towards shorter wavelengths) as it approaches. This tiny shift of the star’s spectrum can be measured with a high-precision spectrograph such as HARPS and used to infer the presence of a planet.

[2] Planets with a mass between one and ten times that of the Earth are called super-Earths. There are no such planets in our Solar System, but they appear to be very common around other stars. Discoveries of such planets in the habitable zones around their stars are very exciting because — if the planet were rocky and had water, like Earth — they could potentially be an abode of life.

[3] Currently the number of exoplanets stands at close to 600. In addition to exoplanets found using radial velocity techniques, more than 1200 exoplanet candidates have been found by NASA’s Kepler mission using an alternative method — searching for the slight drop in the brightness of a star as a planet passes in front of it (transits) and blocks some of the light. The majority of planets discovered by this transit method are very distant from us. But, in contrast, the planets found by HARPS are around stars close to the Sun. This makes them better targets for many kinds of additional follow-up observations.

[4] Neptune has about seventeen times the mass of Earth.

[6] Using the radial velocity method, astronomers can only estimate a minimum mass for a planet as the mass estimate also depends on the tilt of the orbital plane relative to the line of sight, which is unknown. From a statistical point of view, this minimum mass is however often close to the real mass of the planet.

[8] With large numbers of measurements, the detection sensitivity of HARPS is close to 100% for super-Earths of ten Earth-masses with orbital periods of up to one year, and even when considering planets of three Earth masses with a one-year orbit, the probability of detection remains close to 20%.

[9] ESPRESSO, the Echelle SPectrograph for Rocky Exoplanet and Stable Spectroscopic Observations, is to be installed on the ESO Very Large Telescope. Currently undergoing preliminary design, it is scheduled to start operating in 2016. ESPRESSO will feature radial velocity precision of 0.35 km/h or less. For comparison, Earth induces a 0.32 km/h radial velocity on the Sun. This resolution should thus enable ESPRESSO to discover Earth-mass planets in the habitable zone of low-mass stars.

The results are being presented on 12 September 2011 at the conference on Extreme Solar Systems held at the Grand Teton National Park, Wyoming, USA.

A summary is presented in the following paper (in preparation): “The HARPS search for southern extra-solar planets, XXXIV — Occurrence, mass distribution and orbital properties of super-Earths and Neptune-type planets” to appear in the journal Astronomy & Astrophysics.

PR slika eso1134a
Artists’s impression of one of more than 50 new exoplanets found by HARPS: the rocky super-Earth HD 85512 b

PR slika eso1134b
Artists’s impression of one of more than 50 new exoplanets found by HARPS: the rocky super-Earth HD 85512 b

PR slika eso1134c
Artists’s impression of one of more than 50 new exoplanets found by HARPS: the rocky super-Earth HD 85512 b 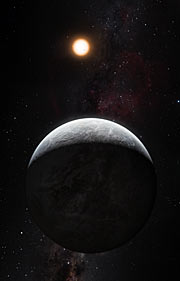 PR slika eso1134d
Artists’s impression of one of more than 50 new exoplanets found by HARPS: the rocky super-Earth HD 85512 b 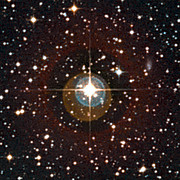 PR slika eso1134f
The habitable zone around some stars with planets 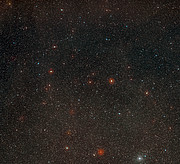