Giant Space Blob Glows from Within

VLT finds primordial cloud of hydrogen to be centrally powered

Observations from ESO’s Very Large Telescope have shed light on the power source of a rare vast cloud of glowing gas in the early Universe. The observations show for the first time that this giant “Lyman-alpha blob” — one of the largest single objects known — must be powered by galaxies embedded within it. The results appear in the 18 August issue of the journal Nature.

A team of astronomers has used ESO’s Very Large Telescope (VLT) to study an unusual object called a Lyman-alpha blob [1]. These huge and very luminous rare structures are normally seen in regions of the early Universe where matter is concentrated. The team found that the light coming from one of these blobs is polarised [2]. In everyday life, for example, polarised light is used to create 3D effects in cinemas [3]. This is the first time that polarisation has ever been found in a Lyman-alpha blob, and this observation helps to unlock the mystery of how the blobs shine.

“We have shown for the first time that the glow of this enigmatic object is scattered light from brilliant galaxies hidden within, rather than the gas throughout the cloud itself shining.” explains Matthew Hayes (University of Toulouse, France), lead author of the paper.

Lyman-alpha blobs are some of the biggest objects in the Universe: gigantic clouds of hydrogen gas that can reach diameters of a few hundred thousand light-years (a few times larger than the size of the Milky Way), and which are as powerful as the brightest galaxies. They are typically found at large distances, so we see them as they were when the Universe was only a few billion years old. They are therefore important in our understanding of how galaxies formed and evolved when the Universe was younger. But the power source for their extreme luminosity, and the precise nature of the blobs, has remained unclear.

The team studied one of the first and brightest of these blobs to be found. Known as LAB-1, it was discovered in 2000, and it is so far away that its light has taken about 11.5 billion years to reach us (redshift 3.1). With a diameter of about 300 000 light-years it is also one of the largest known, and has several primordial galaxies inside it, including an active galaxy [4].

There are several competing theories to explain Lyman-alpha blobs. One idea is that they shine when cool gas is pulled in by the blob’s powerful gravity, and heats up. Another is that they are shining because of brilliant objects inside them: galaxies undergoing vigorous star formation, or containing voracious black holes engulfing matter. The new observations show that it is embedded galaxies, and not gas being pulled in, that power LAB-1.

The team tested the two theories by measuring whether the light from the blob was polarised. By studying how light is polarised astronomers can find out about the physical processes that produced the light, or what has happened to it between its origin and its arrival at Earth. If it is reflected or scattered it becomes polarised and this subtle effect can be detected by a very sensitive instrument. To measure polarisation of the light from a Lyman-alpha blob is, however, a very challenging observation, because of their great distance.

“These observations couldn’t have been done without the VLT and its FORS instrument. We clearly needed two things: a telescope with at least an eight-metre mirror to collect enough light, and a camera capable of measuring the polarisation of light. Not many observatories in the world offer this combination.” adds Claudia Scarlata (University of Minnesota, USA), co-author of the paper.

By observing their target for about 15 hours with the Very Large Telescope, the team found that the light from the Lyman-alpha blob LAB-1 was polarised in a ring around the central region, and that there was no polarisation in the centre. This effect is almost impossible to produce if light simply comes from the gas falling into the blob under gravity, but it is just what is expected if the light originally comes from galaxies embedded in the central region, before being scattered by the gas.

The astronomers now plan to look at more of these objects to see if the results obtained for LAB-1 are true of other blobs.

[1] The name comes from the fact that these blobs emit a characteristic wavelength of light, known as “Lyman-alpha” radiation, that is produced when electrons in hydrogen atoms drop from the second-lowest to the lowest energy level.

[2] When light waves are polarised, their component electric and magnetic fields have a specific orientation. In unpolarised light the orientation of the fields is random and has no preferred direction.

[4] Active galaxies are galaxies whose bright cores are believed to be powered by a vast black hole. Their luminosity comes from material being heated as it is pulled in by the black hole.

This research was presented in the paper “Central Powering of the Largest Lyman-alpha Nebula is Revealed by Polarized Radiation” by Hayes et al. to appear in the journal Nature on 18 August 2011. 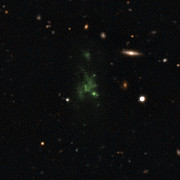 PR slika eso1130b
Closing in on a giant space blob 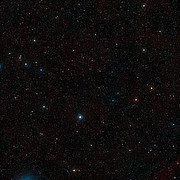