How Much Mass Makes a Black Hole?

Using ESO’s Very Large Telescope, European astronomers have for the first time demonstrated that a magnetar — an unusual type of neutron star — was formed from a star with at least 40 times as much mass as the Sun. The result presents great challenges to current theories of how stars evolve, as a star as massive as this was expected to become a black hole, not a magnetar. This now raises a fundamental question: just how massive does a star really have to be to become a black hole?

To reach their conclusions, the astronomers looked in detail at the extraordinary star cluster Westerlund 1 [1], located 16 000 light-years away in the southern constellation of Ara (the Altar). From previous studies (eso0510), the astronomers knew that Westerlund 1 was the closest super star cluster known, containing hundreds of very massive stars, some shining with a brilliance of almost one million suns and some two thousand times the diameter of the Sun (as large as the orbit of Saturn).

“If the Sun were located at the heart of this remarkable cluster, our night sky would be full of hundreds of stars as bright as the full Moon,” says Ben Ritchie, lead author of the paper reporting these results.

Westerlund 1 is a fantastic stellar zoo, with a diverse and exotic population of stars. The stars in the cluster share one thing: they all have the same age, estimated at between 3.5 and 5 million years, as the cluster was formed in a single star-formation event.

A magnetar (eso0831) is a type of neutron star with an incredibly strong magnetic field — a million billion times stronger than that of the Earth, which is formed when certain stars undergo supernova explosions. The Westerlund 1 cluster hosts one of the few magnetars known in the Milky Way. Thanks to its home in the cluster, the astronomers were able to make the remarkable deduction that this magnetar must have formed from a star at least 40 times as massive as the Sun.

As all the stars in Westerlund 1 have the same age, the star that exploded and left a magnetar remnant must have had a shorter life than the surviving stars in the cluster. “Because the lifespan of a star is directly linked to its mass — the heavier a star, the shorter its life — if we can measure the mass of any one surviving star, we know for sure that the shorter-lived star that became the magnetar must have been even more massive,” says co-author and team leader Simon Clark. “This is of great significance since there is no accepted theory for how such extremely magnetic objects are formed.”

The astronomers therefore studied the stars that belong to the eclipsing double system W13 in Westerlund 1 using the fact that, in such a system, masses can be directly determined from the motions of the stars.

By comparison with these stars, they found that the star that became the magnetar must have been at least 40 times the mass of the Sun. This proves for the first time that magnetars can evolve from stars so massive we would normally expect them to form black holes. The previous assumption was that stars with initial masses between about 10 and 25 solar masses would form neutron stars and those above 25 solar masses would produce black holes.

“These stars must get rid of more than nine tenths of their mass before exploding as a supernova, or they would otherwise have created a black hole instead,” says co-author Ignacio Negueruela. “Such huge mass losses before the explosion present great challenges to current theories of stellar evolution.”

“This therefore raises the thorny question of just how massive a star has to be to collapse to form a black hole if stars over 40 times as heavy as our Sun cannot manage this feat,” concludes co-author Norbert Langer.

The formation mechanism preferred by the astronomers postulates that the star that became the magnetar — the progenitor — was born with a stellar companion. As both stars evolved they would begin to interact, with energy derived from their orbital motion expended in ejecting the requisite huge quantities of mass from the progenitor star. While no such companion is currently visible at the site of the magnetar, this could be because the supernova that formed the magnetar caused the binary to break apart, ejecting both stars at high velocity from the cluster.

“If this is the case it suggests that binary systems may play a key role in stellar evolution by driving mass loss — the ultimate cosmic ‘diet plan’ for heavyweight stars, which shifts over 95% of their initial mass,” concludes Clark.

[1] The open cluster Westerlund 1 was discovered in 1961 from Australia by Swedish astronomer Bengt Westerlund, who later moved from there to become ESO Director in Chile (1970–74). This cluster is behind a huge interstellar cloud of gas and dust, which blocks most of its visible light. The dimming factor is more than 100 000, and this is why it has taken so long to uncover the true nature of this particular cluster.

Westerlund 1 is a unique natural laboratory for the study of extreme stellar physics, helping astronomers to find out how the most massive stars in our Milky Way live and die. From their observations, the astronomers conclude that this extreme cluster most probably contains no less than 100 000 times the mass of the Sun, and all of its stars are located within a region less than 6 light-years across. Westerlund 1 thus appears to be the most massive compact young cluster yet identified in the Milky Way galaxy.

All stars so far analysed in Westerlund 1 have masses at least 30–40 times that of the Sun. Because such stars have a rather short life — astronomically speaking — Westerlund 1 must be very young. The astronomers determine an age somewhere between 3.5 and 5 million years. So, Westerlund 1 is clearly a “newborn” cluster in our galaxy.

The research presented in this ESO Press Release will soon appear in the research journal Astronomy and Astrophysics (“A VLT/FLAMES survey for massive binaries in Westerlund 1: II. Dynamical constraints on magnetar progenitor masses from the eclipsing binary W13”, by B. Ritchie et al.). The same team published a first study of this object in 2006 (“A Neutron Star with a Massive Progenitor in Westerlund 1”, by M.P. Muno et al., Astrophysical Journal, 636, L41).

The astronomers used the FLAMES instrument on ESO’s Very Large Telescope at Paranal, Chile to study the stars in the Westerlund 1 cluster. 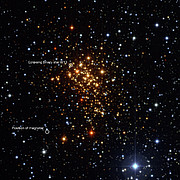 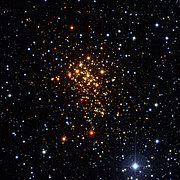