An ALMA antenna on the move 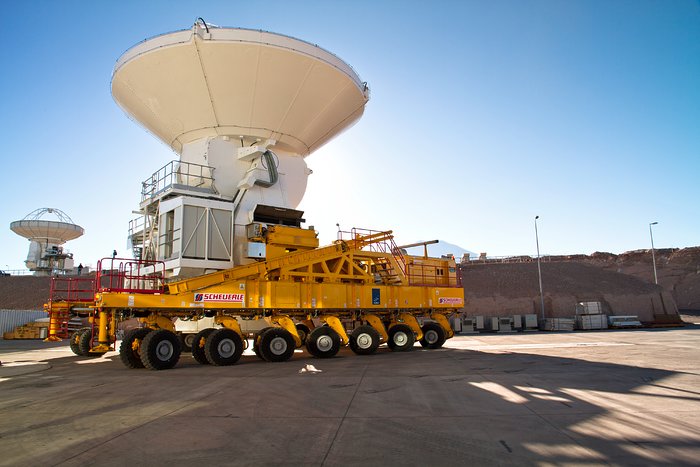 This photograph shows one of the 12-metre-diameter European antennas of the Atacama Large Millimeter/submillimeter Array (ALMA) being moved at the project’s Operations Support Facility. Since this photograph was taken, this antenna, and others like it, have been put into operation as ALMA has begun scientific observations with a partial array (see eso1137). Most recently, the Call for Proposals for ALMA’s next phase of observations closed on Thursday 12 July. Over 1100 proposals were received from astronomers around the world.

ALMA makes its observations on the Chajnantor plateau at an altitude of 5000 metres. Once construction is completed, ALMA will have an array of 66 high-precision 12-metre- and 7-metre-diameter antennas, spread over distances of up to 16 kilometres, working together as a single telescope at wavelengths of 0.32 to 3.6 millimetres. More than half of the 66 antennas are already on Chajnantor (see ann12035). Twenty-five ALMA antennas are being provided by ESO through a contract with the European AEM Consortium, 25 antennas are being provided by North America, and 16 by East Asia.

The antennas, each weighing about 100 tonnes, are assembled and tested at the Operations Support Facility, high in Chile’s Atacama region, at an altitude of 2900 metres. They are moved from there to the Chajnantor plateau, 5000 metres above sea level, with the help of two specially designed ALMA antenna transporters — huge vehicles that drive on 28 tyres, are 10 metres wide, 20 metres long and 6 metres high, weigh 130 tonnes, and have as much power as two Formula 1 engines. One of the transporters, named Otto, is being used in this photograph, which was taken when the first European antenna was handed over to the observatory in April 2011.