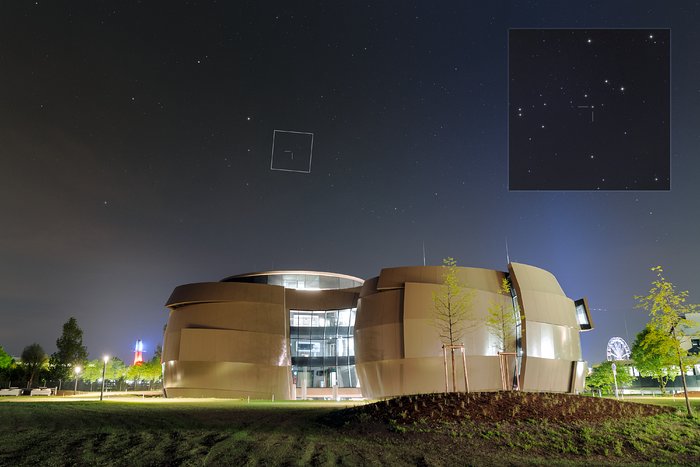 In an astronomically unlikely coincidence, a star exploded as a nova in the sky over the Supernova Planetarium & Visitor centre less than a week after its inauguration. An image of the dwarf nova V392 Persei was captured by ESO photo ambassador Petr Horálek on 2 May 2018. It shows a wide angle view of the evening sky over the ESO Supernova, looking west-northwest.

The position of the nova over the ESO Supernova is marked on the wide view with an insert showing a zoomed view of the area taken with same camera but using a different lens. In this image the nova is easily identifiable due to its typical orange colour.

Dwarf novae occur as a result of a white dwarf star accreting material from its lower mass, binary companion. The material from the disc is compressed as it is transferred to the surface of the white dwarf where it is then heated and ignites into an very powerful (and bright) explosion. The case of nova V392 Persei is, actually, a much rarer and more brilliant event. There has only been one occurrence in the history of dwarf novae observations where a star has transitioned to a fully fledged and much brighter nova. This was V1213 Centauri in 2009 and now we have the second such event, V392 Persei.

The image is symbolic as the ESO Supernova building is designed to look like a double star system, very similar to the one involving dwarf nova V392 Persei, which would eventually result in one of the stars exploding as a supernova in a brilliant flash of light — hence the centre’s name.