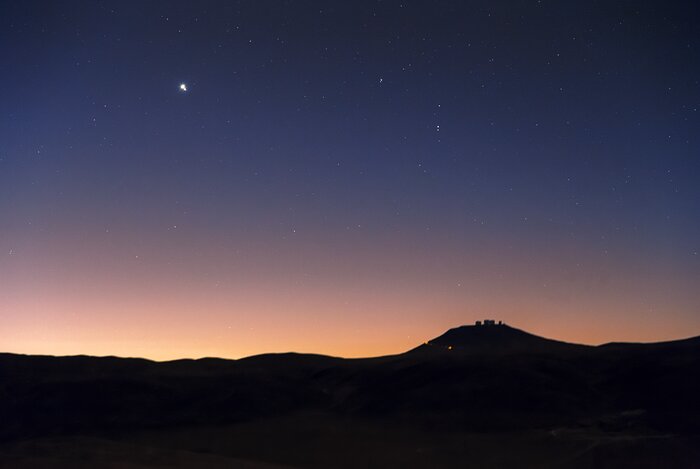 A very bright and large point is the undisputed protagonist of the top half of this picture of the sky above ESO’s Very Large Telescope (VLT) on Cerro Paranal in Chile’s Atacama Desert. Yet if you take a closer look, you will notice it is not just one point, but two, very close to each other. What you see is, in fact, a conjunction of Jupiter and Saturn.

Jupiter and Saturn are the two largest planets in the Solar System, almost 320 and 95 times as massive as the Earth, respectively. They are not rocky, like the Earth or Mars, but are mainly made up of hydrogen. They both have tens of moons, many of which we think did not form together with the planets they orbit, but were instead captured at a later stage by their strong gravitational fields.

Conjunctions occur when two objects are aligned in the sky. However, conjunctions are a consequence of the observer’s perspective. If seen not from Earth but another direction, the involved objects will not be aligned. A similar effect holds for constellations, whose shapes, so familiar here on our planet, may not be recognisable when observed from another corner of the galaxy.