The Glowing Halo of a Zombie Star

The remains of a fatal interaction between a dead star and its asteroid supper have been studied in detail for the first time by an international team of astronomers using the Very Large Telescope at ESO’s Paranal Observatory in Chile. This gives a glimpse of the far-future fate of the Solar System.

Led by Christopher Manser, a PhD student at the University of Warwick in the United Kingdom, the team used data from ESO’s Very Large Telescope (VLT) and other observatories to study the shattered remains of an asteroid around a stellar remnant — a white dwarf called SDSS J1228+1040 [1].

Using several instruments, including the Ultraviolet and Visual Echelle Spectrograph (UVES) and X-shooter, both attached to the VLT, the team obtained detailed observations of the light coming from the white dwarf and its surrounding material over an unprecedented period of twelve years between 2003 and 2015. Observations over periods of years were needed to probe the system from multiple viewpoints [2].

“The image we get from the processed data shows us that these systems are truly disc-like, and reveals many structures that we cannot detect in a single snapshot,” explained lead author Christopher Manser.

The team used a technique called Doppler tomography — similar in principle to medical tomographic scans of the human body — which allowed them to map out in detail the structure of the glowing gaseous remains of the dead star’s meal orbiting J1228+1040 for the first time.

While large stars — those more massive than around ten times the mass of the Sun — suffer a spectacularly violent climax as a supernova explosion at the ends of their lives, smaller stars are spared such dramatic fates. When stars like the Sun come to the ends of their lives they exhaust their fuel, expand as red giants and later expel their outer layers into space. The hot and very dense core of the former star — a white dwarf — is all that remains.

But would the planets, asteroids and other bodies in such a system survive this trial by fire? What would be left? The new observations help to answer these questions.

It is rare for white dwarfs to be surrounded by orbiting discs of gaseous material — only seven have ever been found. The team concluded that an asteroid had strayed dangerously close to the dead star and been ripped apart by the immense tidal forces it experienced to form the disc of material that is now visible.

The orbiting disc was formed in similar ways to the photogenic rings seen around planets closer to home, such as Saturn. However, while J1228+1040 is more than seven times smaller in diameter than the ringed planet, it has a mass over 2500 times greater. The team learned that the distance between the white dwarf and its disc is also quite different — Saturn and its rings could comfortably sit in the gap between them [3].

The new long-term study with the VLT has now allowed the team to watch the disc precess under the influence of the very strong gravitational field of the white dwarf. They also find that the disc is somewhat lopsided and has not yet become circular.

“When we discovered this debris disc orbiting the white dwarf back in 2006, we could not have imagined the exquisite details that are now visible in this image, constructed from twelve years of data — it was definitely worth the wait,” added Boris Gänsicke, a co-author of the study.

Remnants such as J1228+1040 can provide key clues to understanding the environments that exist as stars reach the ends of their lives. This can help astronomers to understand the processes that occur in exoplanetary systems and even forecast the fate of the Solar System when the Sun meets its demise in about seven billion years.

[2] The team identified the unmistakable trident-like spectral signature from ionised calcium, called the calcium (Ca II) triplet. The difference between the observed and known wavelengths of these three lines can determine the velocity of the gas with considerable precision.

[3] Although the disc around this white dwarf is much bigger than Saturn’s ring system in the Solar System, it is tiny compared to the debris discs that form planets around young stars.

This research was presented in a paper entitled “Doppler-imaging of the planetary debris disc at the white dwarf SDSS J122859.93+104032.9”, by C. Manser et al., to appear in the Monthly Notices of the Royal Astronomical Society. 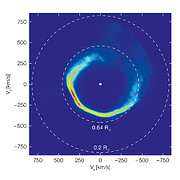 PR videó eso1544a
Artist’s impression of the glowing disc of material around the white dwarf SDSS J1228+1040
Send us your comments!
Subscribe to receive news from ESO in your language
Accelerated by CDN77
Szerződési feltételek