Following testing and preliminary acceptance in Europe in September 2013, MUSE was shipped to ESO’s Paranal Observatory in Chile. It was reassembled at the base camp before being carefully transported to its new home at the VLT, where it is now installed on Unit Telescope 4. MUSE is the latest of the second generation instruments for the VLT (the first two were X-shooter and KMOS and the next, SPHERE, will follow shortly).

The leader of the team and principal investigator for the instrument, Roland Bacon (Centre de Recherche Astrophysique de Lyon, France), expressed his feelings: “It has taken a lot of work by many people over many years, but we have done it! It seems strange that this seven-tonne collection of optics, mechanics and electronics is now a fantastic time machine for probing the early Universe. We are very proud of the achievement — MUSE will remain a unique instrument for years to come.”

MUSE’s science goals include delving into the early epochs of the Universe to probe the mechanisms of galaxy formation and studying both the motions of material in nearby galaxies and their chemical properties. It will have many other applications, ranging all the way from studies of the planets and satellites in the Solar System, through the properties of star-forming regions in the Milky Way and out to the distant Universe.

As a unique and powerful tool for discovery MUSE uses 24 spectrographs to separate light into its component colours to create both images and spectra of selected regions of the sky. It creates 3D views of the Universe with a spectrum for each pixel as the third dimension [1]. During the subsequent analysis the astronomer can move through the data and study different views of the object at different wavelengths, just like tuning a television to different channels at different frequencies.

MUSE couples the discovery potential of an imaging device with the measuring capabilities of a spectrograph, while taking advantage of the much better image sharpness provided by adaptive optics. The instrument is mounted on Unit Telescope 4 of the VLT, which is currently being converted into a fully adaptive telescope.

Since the start of 2014, Bacon and the rest of the MUSE integration and commissioning team at Paranal have recorded the MUSE story in a series of blog posts which can be followed here. The team will present the first results from MUSE at the forthcoming 3D2014 workshop at ESO in Garching bei München, Germany.

“A muse is there to inspire. Indeed, MUSE has inspired us for many years and will continue to do so,” says Bacon in a blog post on the first light. “No doubt many astronomers from all over the world will also be charmed by our MUSE.“

[1] This technique, known as integral field spectroscopy, allows astronomers to simultaneously study the properties of different parts of an object such as a galaxy to see how it is rotating and to measure its mass. It also allows the chemical composition and other physical properties to be determined in different parts of the object. The technique has been used for many years but has now with MUSE reached a leap in sensitivity, efficiency and resolution. One way of describing this, is that MUSE simultaneously combines high-resolution imaging with spectroscopy. 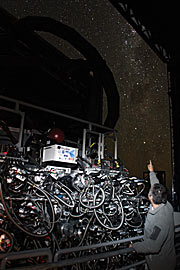 PR videó eso1407f
MUSE views the unusual galaxy NGC 4650A
Send us your comments!
Subscribe to receive news from ESO in your language
Accelerated by CDN77
Szerződési feltételek