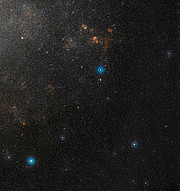 PR kép eso1046b
Wide-field view of part of the Large Magellanic Cloud and the remarkable double star OGLE-LMC-CEP0227
Send us your comments!
Subscribe to receive news from ESO in your language
Accelerated by CDN77
Szerződési feltételek