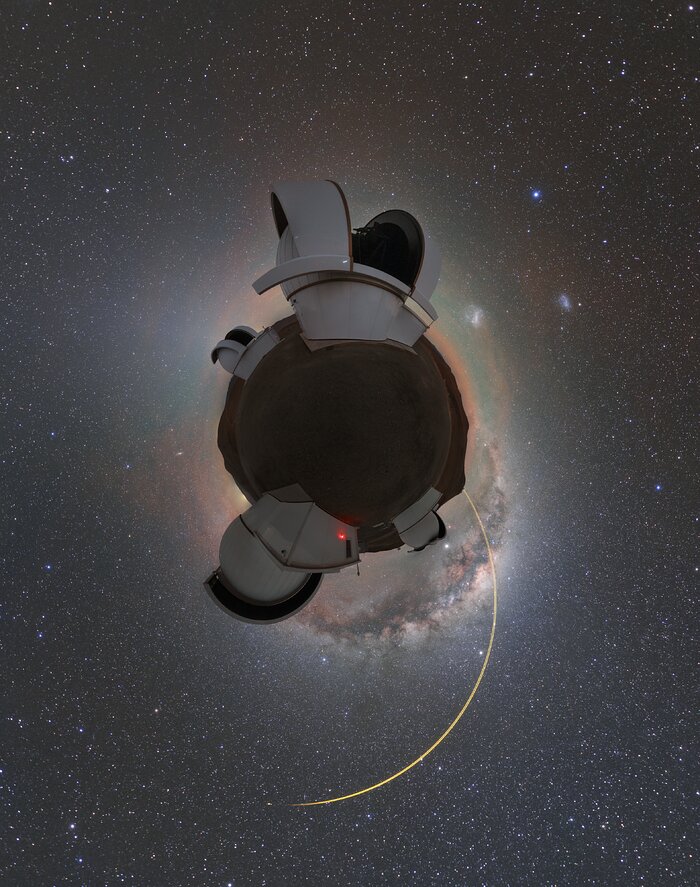 The Search for habitable Planets EClipsing ULtra-cOOl Stars (SPECULOOS) telescopes sited at ESO’s Paranal Observatory in Chile’s Atacama Desert are usually the ones looking for new worlds, but this picture actually captures the observing site looking like a planet itself. This is constructed using a photography technique called stereographic projection, whereby a spherical image — like a 360º panorama — is projected onto a plane.

The mission of SPECULOOS is to detect terrestrial planets as they pass between us and their parent small, cool star in the solar neighbourhood, leading to a tiny, regular dimming in the star’s brightness. Exoplanets discovered by this so-called transit method can be studied in great detail, including making precise measurements of their mass and radius, and analysing their possible atmospheres and potential for life.

SPECULOOS, whose name is inspired by the sweet treat famous in Belgium, The Netherlands and Germany, comprises four telescopes, each with a one-metre primary mirror and cameras that are highly sensitive in the near-infrared.

In the background of “Planet SPECULOOS”, the lasers of ESO’s Very Large Telescope are being used to create artificial stars high up in the atmosphere to measure and correct turbulence. If you look carefully you can actually see these stars as a yellow dot where the laser beams end!