In a cosmic wonderland 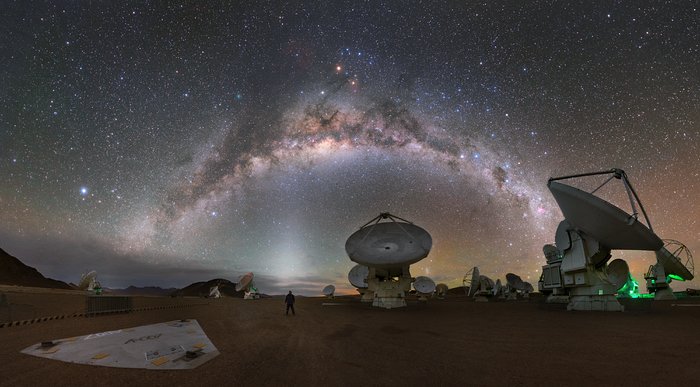 This panoramic selfie was taken on 9 April 2016 by ESO Photo Ambassador Petr Horálek. Petr was in the Chilean Atacama Desert as a member of ESO’s Fulldome Expedition team, a select group of photographers who captured an array of stunning, ultra-high-definition visuals for use primarily in the ESO Supernova Planetarium & Visitor Centre.

The landscape looms large around photographer Petr in this image, making him appear small beneath the striking Chilean sky. He can be seen standing just beneath a column of zodiacal light — perfect positioning that makes this image appear even more otherworldly.

The wide, round-topped objects visible here are some of the 12-metre antennas comprising the Atacama Large Millimeter/submillimeter Array (ALMA). ALMA is the largest ground-based astronomical observatory in the world, and is located on the Chajnantor Plateau in Chile at an altitude of 5000 metres. A total of 66 antennas make up the array, and can be connected together in different configurations to act as a single telescope, known as an interferometer. This arrangement enables ALMA to be the most powerful explorer of the Universe in millimetre and submillimetre light, the kind of light that is produced by cool, distant, ancient phenomena throughout the cosmos, allowing us to explore the birth of stars, the formation of exoplanets, and distant galaxies