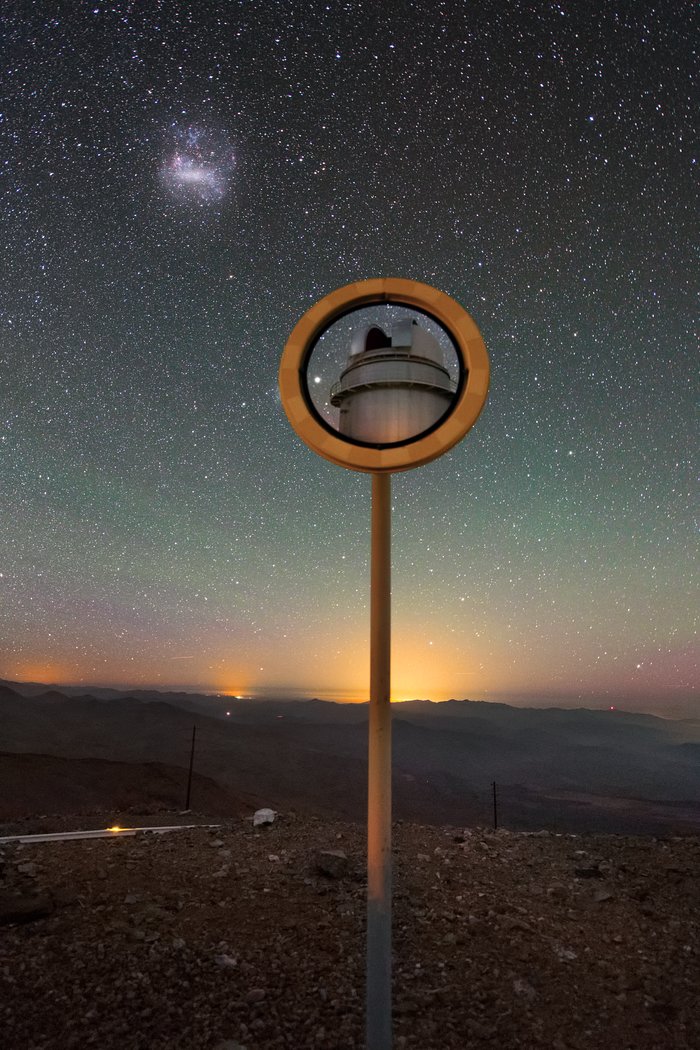 At first glance, this image may be more than a little confusing — is the domed telescope at the centre of the image part of a framed roadside photograph? Is it floating in mid-air? What, exactly, is going on?

Sadly, nothing as exciting as a levitating telescope — this is simply a trick of peculiar perspective and clever camerawork. Here, the Danish 1.54-metre telescope is perfectly framed and reflected in one of the many roadside mirrors around ESO’s La Silla Observatory. The telescope appears to point towards the Large Magellanic Cloud (LMC) as if it were observing. The LMC is a small nearby galaxy that orbits the Milky Way and can be seen lurking in the upper left of the image.

Due to the extremely sensitive technique used, a soft green radiance known as airglow, caused by the faint emission of light in Earth’s atmosphere, can be seen sweeping across the sunset skies. In the distance, faint orange halos mark the locations of very distant towns and cities sitting beyond the mountainous horizon.

ESO's La Silla Observatory is located on the outskirts of the Chilean Atacama Desert, at 2400 metres above sea level. La Silla has been an ESO stronghold since the 1960s, and currently operates two of the most productive four-metre-class telescopes in the world. This never-before-seen snapshot of La Silla was captured by ESO Photo Ambassador Yuri Beletsky.