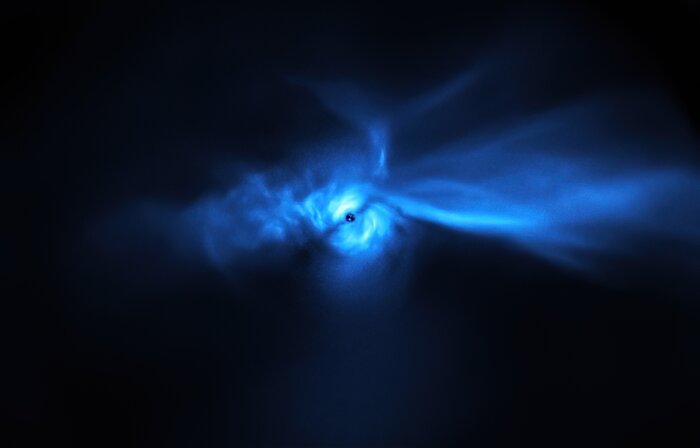 Appearing as a bird in flight, with wings outstretched in the expanse of space, SU Aur, a star much younger and more massive than the Sun, is surrounded by a giant planet-forming disc. This image, captured by the SPHERE instrument on ESO’s Very Large Telescope (VLT), shows the disc around SU Aur in unprecedented detail, including the long dust trails connected to it. The star itself is obscured by the instrument’s coronagraph, a device that blocks the light from the central star to allow the less bright features around it to stand out.

The dust trails are composed of material from an encompassing nebula flowing into the disc. This nebula is likely the outcome of a collision between the star and a huge cloud of gas and dust, resulting in the unique shape of this planet-forming disc and the surrounding dust structure. A new study of SU Aur, which used the VLT and data from other telescopes, including the Atacama Large Millimeter/Submillimeter Array, showed that the nebula is still feeding material to the planet-forming disc. These new observations highlight how complex planet-forming discs can be.