The Cosmos in Motion 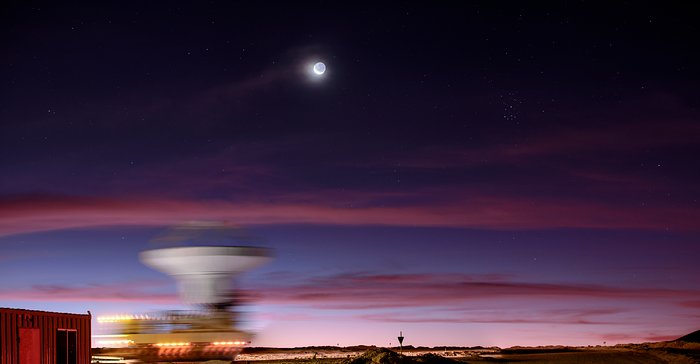 The entire Universe is constantly on the move, from individual atoms all the way up to massive galaxy clusters. This is beautifully showcased in an image such as this, taken from the Chajnantor plateau some 5000 metres up in the Chilean Atacama Desert. This extremely arid and remote environment is home to the Atacama Large Millimeter/submillimeter Array (ALMA), the largest telescope array in existence.

The blurred object is a specialised transporter, caught in the act of carefully carrying one of ALMA’s 66 high-precision antennas to a specific position on the plateau. By arranging the antennas in more extended configurations, astronomers can obtain far more highly spatially resolved images (meaning that the image is more detailed), while more compact configurations give better sensitivity for sources which spread over more of the sky.

There’s movement going on above, too. Smooth stretches of cloud sweep across the pristine Chilean sky under the watch of Earth’s constant lunar companion. Given its tranquil, lantern-like appearance, it is easy to forget that the Moon is constantly hurtling round the Earth at breakneck speed. Further out, the visible pinpoints of starlight and the fuzzy shapes of galaxies may seem eternal, but of course they too are constantly moving and interacting. The many clear nights that Chajnantor has to offer provide ALMA with the perfect vantage point from which to see this flurry of cosmic activity.