Under the celestial arch 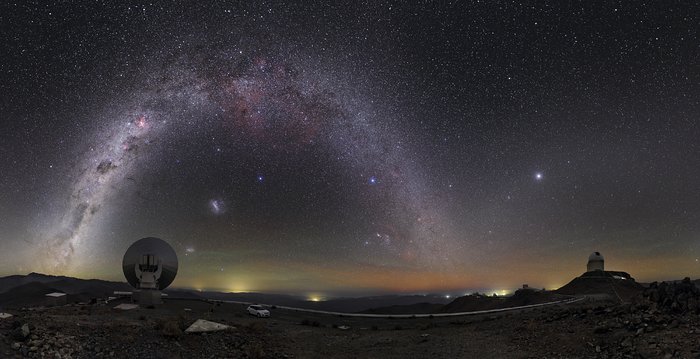 In this spectacular image, taken by ESO Photo Ambassador Petr Horálek, we see the bright arc of the Milky Way stretching across the sky above ESO’s La Silla Observatory in Chile. On the ground are the dome of ESO’s 3.6-metre optical telescope (on the right) and the silvery dish of the Swedish-ESO submillimetre telescope (on the left). Even though it was decommissioned in 2003 to make way for the more advanced APEX and ALMA instruments, the Swedish-ESO dish still seems to be gazing longingly at the sky, perhaps hoping for another chance to explore the mysteries of the heavens.

The Milky Way dominates this image, showing clearly why La Silla is one of the best astronomical sites in the world, famed for its dark skies and clear air. From the peak of the bright arc hangs a striking red feature known as Gum Nebula. This, like similar regions along the band of the Milky Way, is an emission nebula, where gas is made to glow by radiation emitted from nearby bright stars. The bright band of the Milky Way is broken up by dark filaments of dust, wherein stars are forming, stars that will add to the spectacle in the millennia to come.

Sitting under the arc is one of the Milky Way’s companion dwarf galaxies, the Large Magellanic Cloud; below it, just to the right of the Swedish-ESO dish, is the second such companion, known unsurprisingly as the Small Magellanic Cloud. Over to the right of the image is the planet Jupiter, glowing brightly against the faint glow of the gegenschein, a phenomenon only seen in the darkest skies. A rare sight for most, this magical celestial display is commonplace at astronomical observing sites like La Silla.