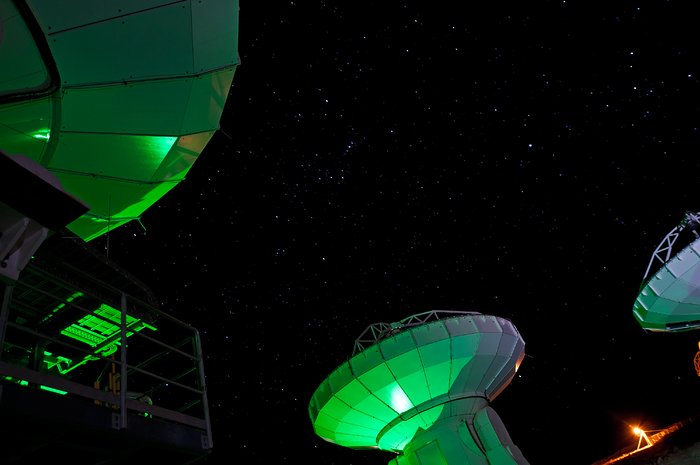 Standing watch over the antennas of the Atacama Large Millimeter/submillimeter Array (ALMA), Orion, the Hunter, shines high in the Chilean night sky. With its distinctive hourglass shape and the three bright stars of Orion’s Belt in the centre, the constellation is easily recognisable. Taken from the southern hemisphere, this image shows Orion’s sword above the Belt. The sword is home to one of the most stunning features of the sky — the Orion Nebula — which appears as the middle “star” in the sword, its fuzzy nebulosity visible to the naked eye under good conditions.

The three ALMA antennas visible in the image represent only a small part of the complete ALMA array, which has a total of 66 antennas. ALMA combines the signals from its antennas, separated over distances of up to 16 kilometres, to form a single giant telescope, using a technique called interferometry. While construction is not due to be completed until 2013, early scientific observations began with a partial set of antennas late in 2011.

At 5000 metres altitude on the Chajnantor Plateau in the foothills of the Chilean Andes, in one of the most arid regions in the world, ALMA is guaranteed outstanding observing conditions. A high, dry site such as Chajnantor is needed because water vapour and oxygen in the Earth’s atmosphere strongly absorb the millimetre and submillimetre wavelengths of light at which ALMA is designed to observe.

In this photograph, the antennas were being tested at ALMA’s Operations Support Facility, located at the slightly lower altitude of 2900 metres. Once tested and fully equipped, they were transported up to the Chajnantor plateau to begin their work.

This image was taken by Adrian Russell, who submitted the photograph to the Your ESO Pictures Flickr group. The Flickr group is regularly reviewed and the best photos are selected to be featured in our popular Picture of the Week series, or in our gallery. In 2012, as part of ESO’s 50th anniversary year, we are also welcoming your historical ESO-related images.