Hidden treasure on our doorstep 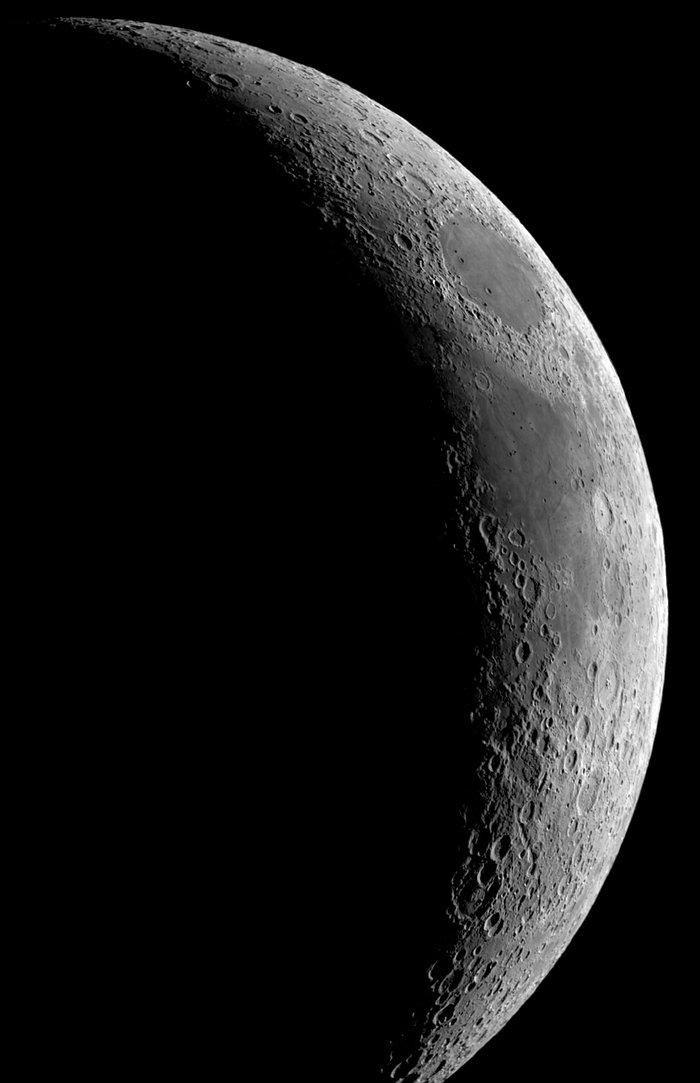 The MPG/ESO 2.2-metre telescope at La Silla in Chile is a powerful instrument that can capture distant celestial objects, but it has been used here to image a heavenly body that is much closer to home: the Moon. The data used for this image were selected by Andy Strappazzon from Belgium, who participated in ESO’s Hidden Treasures 2010 astrophotography competition. Andy’s composition of the Moon was the fourth highest ranked entry in the competition.

This image of the crescent Moon shows sunlight skimming across the heavily pocked surface, filling its craters with shadows. This is a fairly flat region of the Moon, but elsewhere, high mountains can be found, with some peaks reaching about 5000 metres. When backlit by the Sun, these mountains cast long shadows on the lunar surface. In the 1600s, Galileo Galilei used these long shadows to determine the height of the peaks.

At the Moon’s poles (not seen in this picture), some craters are permanently shadowed and the floors of some may have not seen sunlight for billions of years. Scientists had long suspected that these dark and constantly cold regions of the Moon could harbour water ice, but it wasn’t until late 2009 that evidence for this was found.

In a NASA mission called LCROSS (Lunar Crater Observation and Sensing Satellite), a spent rocket booster was sent on a one-way collision course to the Moon’s south pole, while the remaining part of the spacecraft hunted for evidence of water in the ejected debris. The mission was a success and its findings confirmed the presence of water ice within these dark craters. The finding has important implications for the future of human exploration of the Moon and elsewhere in the Solar System.

This view of the Moon was taken through a narrowband red filter (H-alpha). The height of the image is about 30 arcminutes.

This image was processed by ESO using the observational data found by Andy Strappazzon (Belgium) [1], who participated in ESO’s Hidden Treasures 2010 astrophotography competition [2], organised by ESO in October–November 2010, for everyone who enjoys making beautiful images of the night sky using astronomical data obtained with professional telescopes.

[1] Andy searched through ESO’s archive and identified datasets that he used to compose his image of the Moon, which was the fourth highest ranked entry in the competition, out of almost 100 entries. His original work can be seen here.